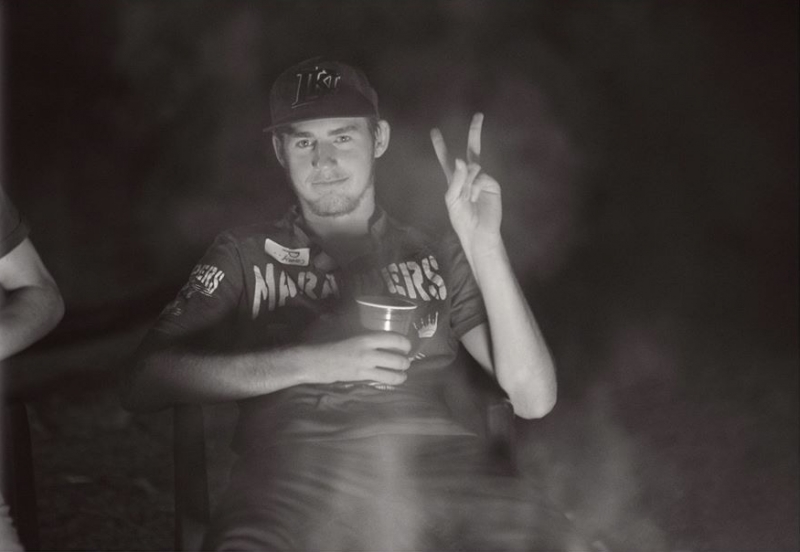 One hungover morning we woke Cory up with his Level, as we wanted to see how Level he was, it was an inside joke between us all as everything had to be levelled at home. He used it for absolutely anything, especially the pool table that never seemed to be level :)

I will never forget all the great times we had watching horror movies and getting dinner or drinking together. You will forever be in my heart. No one will ever replace you. I hope you’re at peace now xo

Just remember it’s okay, to not be okay! I wish you spoke up about the demons in your head, I’m not saying goodbye, I’m saying see you later because goodbye means going away, and going away means forgotten! My sincere condolence to Troy, Kayleen and Brit. Cory was a good man, everyone knew that. We will all never forget him, forever loved!

To Kaylene Troy and Brittany,, there is no words that can ever say how deeply we feel for you all at the tragic loss of Cory. He was a truely amazing young man with a fantastic sense of humour the best smile and cheekiest grin ,, <3? We are here for you all now and always , hour by hour ,, day by day ,, <3?

Ill see you on the other side Cory ,but ill feel you every day in my heart you will forever stay. Loved by many as you were so easily loved. That laugh and smile and your heart you wore on your sleeve. Your an old soul with a huge spirit. I love you now and forever. until we meet again... get into some mischief to keep our family spirit pumping xxxxxxxxoooooooooo 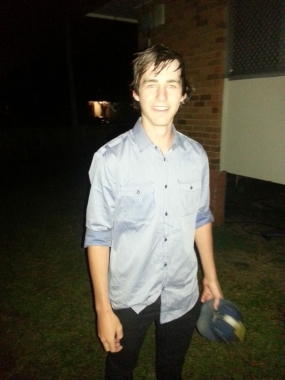 One of the first photos I ever took of you on one of our first ever drunken nights. We had pre drinks at mums house before we walked to catch the train, back when you had no beard, you were baby faced and you scrubbed up well that night! 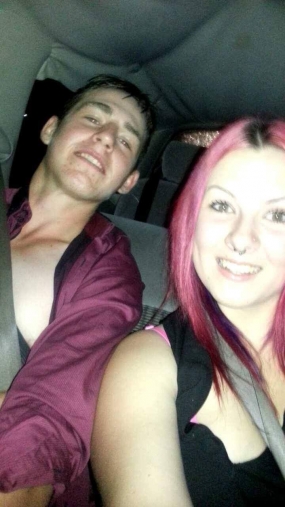 After a few drinks, we headed off down the coast for a pub crawl, you were that blind, you couldn’t even do your shirt buttons up 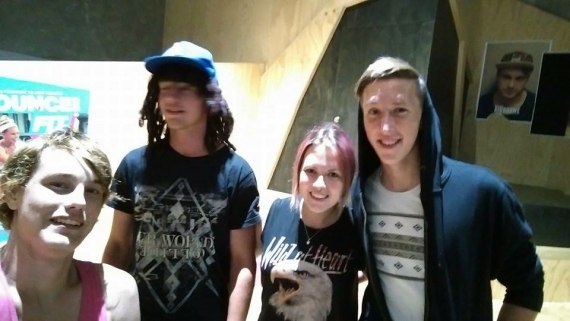 You and that bloody wig haha. If it wasn’t wearing it to bounce, it was you wearing it running past the pub. No shirt on, one shoe and a sock on 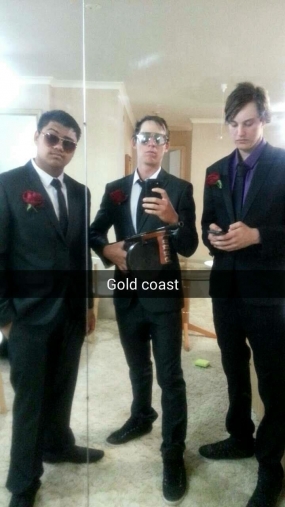 Another one of my birthdays we celebrated down the coast. This year you boys outdone yourselves. You all went and bought suits and a s*** load of roses. You guys stole the night that night. Great memory of you boys 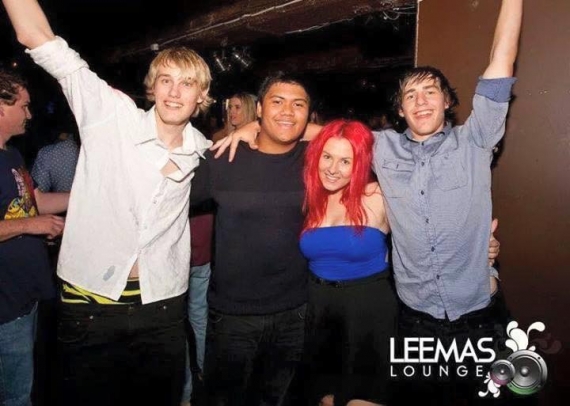 The first time I had a sambucca shot, and it was because you forced me after me always forcing tequila on you! It was ferel and I’ll never forget my reaction, but I did it for you!!! I just wish you knew how much you meant to me. 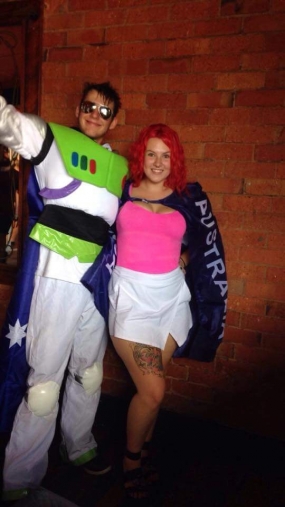 My buzz light year! One of the best days with you! We partied hard and I hope you are partying hard up there bestie! I hope you’ve got buzz up there! 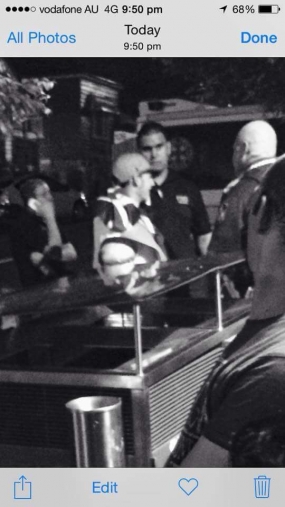 The photo of the police explaining to him he cannot get back in due to him being to intoxicated, you never gave up on an argument easy, thats for sure! 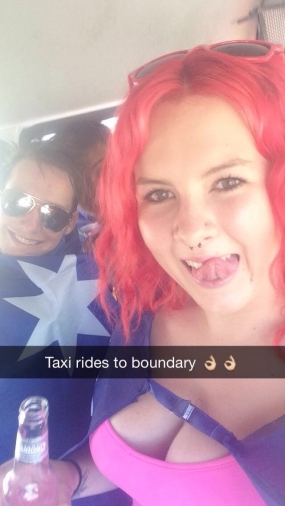 Troy had invited us all over for a BBQ and drinks before we headed out to get absolutely hammered at the Boundary for Australia Day, we started early in the morning, had a feed, had multiple drinks before Cory decides he doesn’t want to go in just plain Australia Day gear, he wanted to go as buzz light year even though it was bloody hot and he was sweating in it before we left home. He ended up wearing it out, we got pretty drunk and around 4oclock we were kicked out for him being blind, everyone else had left from the group and we both thought we’d try our luck at getting back in, we lined up in a 2 hour long line for about 45 mins until the police came and took Cory out of the line, told him he wasn’t aloud back in as he was to intoxicated, he tried to say it wasn’t him and he didn’t get kicked out, all I could do was laugh as the cop said mate you are the only one wearing buzz light year hahaha he tried his hardest that’s for sure. Never a dull moment when we were drinking 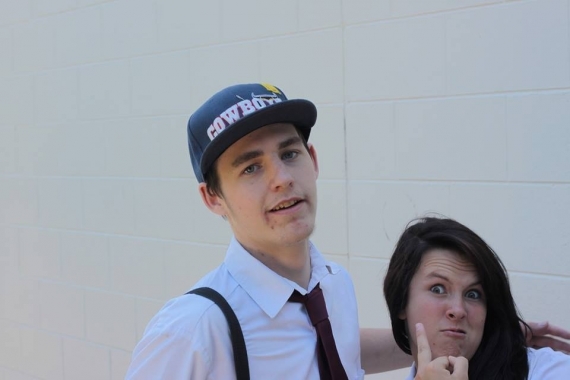 Our friendship to a T, forever pulling faces. I wish I could re live this moment so much! 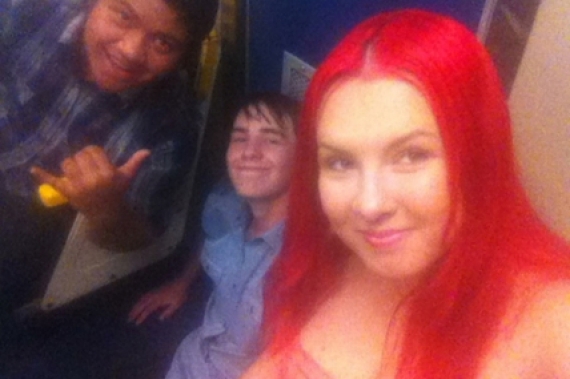 A drunken night out in the Valley, it became our second home.

One hungover morning we woke Cory up with his Level, as we wanted to see how Level he was, it was an inside joke between us all as everything had to be levelled at home. He used it for absolutely anything, especially the pool table that never seemed to be level :) 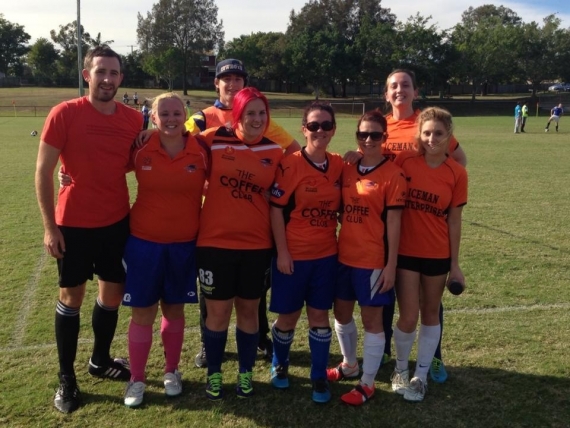 A memory I’ll never ever forget. Cory hated soccer, he thought it was boring, stupid and gay. One weekend I had a small sided soccer competition, we had to play 5-8 games in a few hours, when Cory and I arrived at the field, we were down a player so we asked him to play. To my shock, he said yes, borrowed some boots, and put on an orange bib as we were all in orange, he played like a champion and actually loved it. So many laughs were shared, not only had we been drinking the night before so he played hungover, we went out and drunk after it! Always a smile on his face. But of course, under that orange Bib was his cowboys jersey! Always my bestfriend, and forever someone I counted as my brother. Love and miss you so much already! More than you’ll ever know! Keep smiling <3