CLOW (nee Francis). -- Joan Went to Heaven on 11.2.18 aged 97. Greatly loved by husband and soulmate Frank (dec.), a cherished and wonderful mother to Robert, Bill and Margaret, a cherished motherin- law to Roman and adored by grandchildren Nicole, Katherine, Braydon, and Denae and she was excited to have great-grandchildren Eddie and Scarlet. Godhas you in His keeping - we have you in our hearts 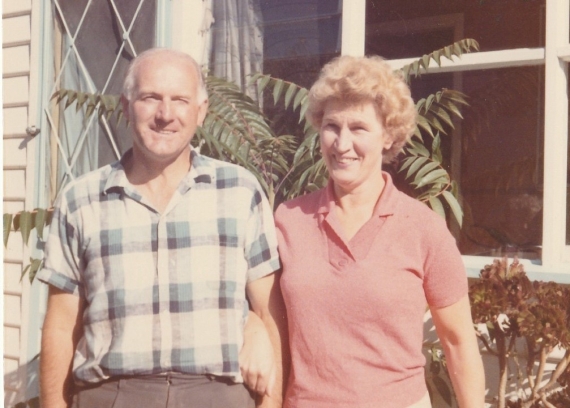 JOAN YVONNE CLOW
Joan was born in Woollhara, NSW on the 3rd of October in 1920. A beautiful daughter to Louisa and Herbert Francis, Louisa a dressmaker and Herbert a carpenter.
She was baptised at All Saints Woollhara in June of 1921.
Soon after the family moved back to Melbourne they lived in Bath Street, St Kilda before moving to Wilton Grove in Elwood. This was to be their home for the next fifteen years.
Joan attended Elwood primary school and then Elwood Central School until 1933.
She often went to the beach during this time, collecting mussels from the local pier and enjoying the sun, sand and sea. In her later life she would not even look at a mussel as she had eaten way too many of them as a child.
Joan then went to Mac Robertson Girls High School and during the school holidays worked at a kiosk in St Kilda beach. She finished school in December 1936 with her Leaving Certificate.
The head mistress wrote the following reference on the 7th December 1936:
“Joan is a girl of excellent character, intelligent, and interested in her work. Thoroughly reliable and trustworthy”.
After leaving school, her family moved to Byrne Avenue Elwood for a short period before moving to 45 Kitchener Street in Deepdene.
Joan liked to keep busy and taught herself how to knit, crochet and tatt, and became extremely proficient at knitting .
She was also taught how to sew by her Mother and used this skill to make many clothes for herself and her family when they were young.
Joan worked for short periods as a typist before gaining employment at the State Electricity Commission in 1937 as a Junior typist.
After moving to Deepdene, Joan started attending services at Saint Barnabus Church in Balwyn.
This is where she met Frank.
Frank was actively involved in establishing a youth club at Saint Barnabus.
They both became part of a friendship group and enjoyed each other’s company until Frank joined the Army and went to fight in the Second World War in late 1939.
Joan was very good friends with her cousins Dorothy and Marjorie, Una and George and they stayed friends for life.

In 1941 Joan was reclassified as a Typist and Stenographer at the State Electricity Commission on her 21st birthday, which she celebrated with family and friends!
She also became a blood donor and completed her St Johns first aid course.
Although enjoying her work at the SEC, and the friendships she made there, Joan resigned in May 1944 with her reference stating
“Miss Francis has proved herself to be a shorthand writer and typist of exceptional ability. Her work has been characterised by speed, accuracy and intelligent application to detail.”
“That Miss Francis is leaving her present position to commence a Nursing career is of course further evidence of her sterling qualities.”

Joan commenced her nursing career at the Prince Henry's hospital.
She told the family when she first started there, one of her jobs was to clean the patients teeth, which she happily did. She was momentarily distracted as she collected the dentures, and consequently didn’t know who they belonged to when she brought them back! It only happened once, never again!
Joan kept in touch with Frank while he served overseas. He was captured in Crete and became a prisoner of war in Poland, and did not return home until after the war ended.
Frank and Joan then became engaged and were married on the 9th of October at Saint Barnabus Church in Balwyn.
Joan had to give up Nursing when she married as she had been living at the hospital while training.
Frank and Joan rented in Cheltenham and Prahran. While they waited until they were able to buy land in Albury Road North Balwyn. This is where they eventually built their home. Joan’s brother Bill, a carpenter, did the majority of the work and was assisted by Frank when he was able.
Joan settled into her new home, with lots of work still to do. She was an excellent cook and it was always a roast lunch on Sunday followed by a compulsory game of 500. Her Christmas cake and plum pudding recipes have been passed on for future generations!!
The births of Robert John, William Geoffrey (Bill) and Margaret Anne completed the family.
In 1966 she finally had the phone installed in the house to enable friends and family to contact her and vice versa.
Joan obtained her drivers licence and was a competent and capable driver. She continued driving until she was 93 years old .
With the move to North Balwyn, Joan became involved with Saint Silas church and attended Sunday services regularly.
She also became a member, and was at one time President of, the Mother’s Union. Receiving a 50 year membership award in 2007, of which she was very proud.
Joan also loved her involvement with the Friendship group, Craft group, Mission Auxiliary, and Bible study fellowship, where she made many great friends.
To fill the rest of her time, she was a Probus member and Legacy member enjoying her friendships there as well.
Joan also volunteered her time to work at the Church Op Shop in Kew which she enjoyed.
She was fortunate to have wonderful friendships with her neighbours, Madge and her family from across the road, and Val next door. The family knew nearly everyone who lived in the street, as you did back then. The children all played out in the street and in the park until dark.
She was never too busy though, to spend time, and care for her husband and family.
Joan and Frank went on many holidays and travelled to most parts of Australia and cruised around the islands.
They felt blessed when they had four grandchildren, Nicole, Katherine, Denae and myself and always made time to be involved in our lives and enjoyed watching us grow.

Joan was widowed in November 2004 and continued to live in the family home.
She was able to continue driving and live independently, with some home help and a gardener.
Her involvement with the church, family and all the other activities kept her busy.
The evenings were her time and she enjoyed the phone calls from friends and her sister-in-law, Merle.
The neighbourhood friends in Albury Road had all moved on, and Joan’s street had changed considerably. There was no immediate support at hand, although she was fortunate that friends did drop by to check on her.
When Joan became unwell and was hospitalised in late 2013, she always aimed to go home.
She did have a brief time back home and found it very hard to accept that a care situation was the best way to go and what she needed.
Joan stayed at Camberwell Manor for a few months and then moved to Baradine, on the proviso that she could go home if she got better.
Her stay at Baradine meant being close to her daughter and son-in-law, but distant from her friends. They did visit and phone which was wonderful.