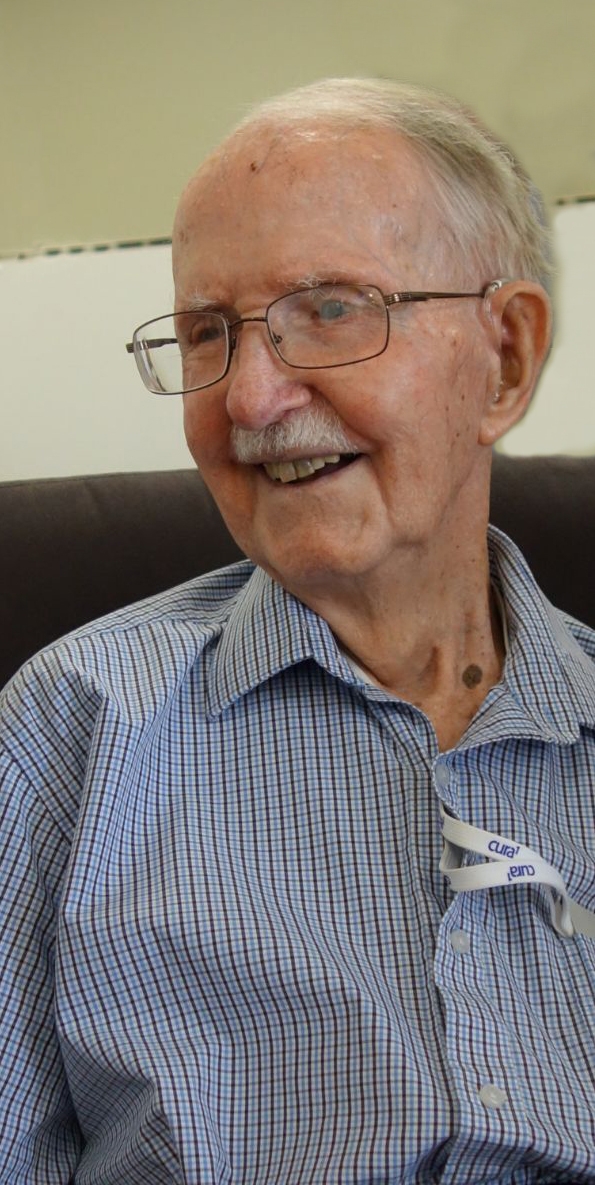 Dear Bill was a Christian gentleman par excellence. What a blessing to have known him. A sad loss for his family and all of us who loved him, but wonderful that he is now with the Lord Jesus Christ for whom he lived a joyous life of service to many. God bless the family.

Bill & Ruth were a devoted couple. They were dear friends of my parents Ken & Elizabeth Rechner. Paul used to stay at our farm at Romsey in the school holidays when Bill & Ruth were in PNG, where they left a lasting legacy. Uncle Bill had an alert mind, he was an avid reader & computer savvy. I remember his twinkling blue eyes & his vibrant faith in God and he was a faithful man of prayer. Bill had a fascinating & long life & was a blessing to many. We remember him with thankfulness. Our loving sympathy to his much loved children, Paul, John & Joy & their families.

I first met Bill many years ago when i sent my 240 volt generator to PNG for use on a mission station Bill was a man who loved the lord and had a very successful missionary ministry. Thanks for the email from the family. God Bless Ron Hopkins

Dear Bill - exemplary Christian friend. Dear Joy and John and Paul: Angela and I join you in love and celebration. Bill and his crystal goodness meant the world to us.

Bill was, as far as I was concernd, was the personification of a gracious Christian gentleman! I was an MAF pilot at Kawito when Bill & Ruth were at Tari and later at Pangoa, and Bill was always on time, efficient, (but not overly hurried) and always willing to help in whatever way he could. I was privileged to have had lunch with both he and Ruth at Pangoa a number of times, such was their out-going, generous spirit. Bill has run a long race, maintaining "the faith" to the end, and while his family will naturally grieve his loss, they will do so, knowing that he is now with his Saviour Jesus who he loved and and so wonderfully and faithfully showed to those who knew him. I count it an honour to have known him.

Our condolances to the family on the passing of Bill. Our prayers are with you. From Knox Audiology Clinic.

There were 4 great loves in Bill life. His Lord, his beloved wife Ruth,who he has now joined in glory, his family and the highland people of Papua. One of Bill's great joys was on a furlowe visit to the UK to see, at the Bible Society HQ, his translation of the New Testament f roll off the printing press. Mission accomplished Bill! I have been told by Paul that Bill still continued to work on translation work well into retirement years. Well done you good and faithful servant. Our love to all the family David & Diane

Thinking of you all at this sad time. I will be thinking of you on Wednesday as you celebrate Uncle Bill's life. Kind regards Cameron

Tribute to Bill Merriweather. Our lives intersected a few brief times, but in very meaningful ways. The first, particularly, was very unusual. I arrived at Tari mid-1966 to look after the Primary School at Walidegemabu. Ruth had been in charge, but now Bill and Ruth were home on furlough. The missionaries occupying their home while they were away were Doug and Beryl Gordon, who were preparing to move to Walumali to look after the MK hostel. Doug and Beryl took me into the home as a boarder till a house became available for me. So it was that my first contact with Bill and Ruth was in their absence: I lived in their home, (the home that came into being through faith), and I took over the running of Ruth’s school till they returned. The following year I moved to Tani. But my fiancée, Meryl arrived, and was stationed at Walidegemabu. Naturally, as Bill was station manager, they had a lot to do with each other. Meryl and co-arrival, Liz (née Humphries) were both nurses looking after the medical work at Walidegemabu. In 1968, Bill, being officially registered as a marriage celebrant, performed our wedding at Walidgemabu on his 51st birthday. Our lives did not touch again until, back in Austrralia, we were on a ‘task group’ for the Asia Pacific Christian Mission, working on A Biblical and Applied Theology of the Indigenous Church. Each member of the working group wrote thoughts and shared with others in the group, and then we met at the Sydney and Missionary Bible College for the final consultation. Knowing of my interest in trying to understand the nature of the church, particularly the indigenous church (which was the church we had planted in PNG) Bill gave me the books he had on ‘The Church’ – which were very helpful. Bill was so encouraging. He wrote the following to me. My concern for you, Syd, is that as the Lord has given you the gift of a good mind and teacher, may he lay on your heart the gift you could give to the whole church in PNG, not only the ECPNG, but all. By that I mean, maybe the Lord will lay on your heart the necessity to prepare a TEE course on the Church. . . . But, unfortunately for us both and for the Church in PNG, that wish never came true. During the late 1980s and early 1990s I initiated correspondence with Bill, asking questions about the early days at Tari, and his understanding of the Huli people and their culture. I realized how ignorant I had been since I had not been at Tari during the pioneering stages, and even for my first 8 years, because of my heavy educational load and lack of facility in the Huli language, was not able to discover too much about the Huli culture. In the first half of the 2000s, Meryl and I had moved to Brishane. On one occasion, we met with Bill at South Bank when he came up to visit John and JanineAgain in 2007, Bill celebrated his 90th at John and Janine’s place at Whiteside, and Meryl and I were able to be present. He had a lot of friends here in Brisbane. I appreciated Bill. I thank God for arranging our lives to intersect. He was a man of God and a lover of His Word. I thank God for the inspiration he was, and for the encouragement he gave to me as a young missionary to the Huli people.. For Paul, John, Joy and grandchildren – my thoughts and prayers are with you Syd Gould

A lovely, faithful man. Such a gracious example to younger missionaries.

We appreciated Bill's warm-hearted and generous encouragement as we prepared to go to Papua New Guinea and his continuing interest over many years.

To all generations of members of Bill's family, Keith & Norma have been blest throughout our lives by Bill's great example, encouragement and prayerful support over many years. It's sad that he has gone, but in his case he has been looking forward to going to be with his Lord, so it would be unfair of us to wish him back again into this sad world from which he recently departed with a shout of joy, and the shout of joyful welcome from his Saviour. If eve r there was a person who deserves the "well done, good and faithful servant" it is Bill. Our mix of loving greetings and condolences to all of Bill's family as you mourn your loss and rejoice in his present state. Love from Keith & Norma

We would like the family to know that they are in our thoughts and prayers as we remember a life well lived. Mr Merriweather was an example to us of Christian character and devotion to His Saviour and Lord. To be now forever with his Lord which is far better. Sorry to be unable to be with you at the Funeral Service. With much love.Roy and Jenni

Dear Joy, your brothers, and all your family, thank God for Bill, for his consistency, his sincere love for people, for his strong Christian faith, his work in PNG, for his life!! I know you well be missing him, but remembering him with love, and I rejoice with you that he is "home" with his Lord. My love at this time. Joan

We are sorry that we cannot attend the thanksgiving service for Bill Merriweather's life tomorrow. We have previous commitments to attend . We trust the service will be a special time of remembering Bill's character and ministry and giving thanks for the way He revealed the Kingdom of God in his life. It will also be a joyful time knowing that Bill no longer has to wait to see the Lord Jesus. We pray that Father God blesses each member of Bill's extended family as they grieve and also give thanks for His life. Matthew 5:4 Blessed are those who mourn for they will be comforted.

We are sorry that we cannot attend the thanksgiving service for Bill Merriweather's life tomorrow at Mitcham Baptist Church. We have previous commitments which we cannot change. We trust the service will be a special time of remembering Bill's character and ministry and giving thanks for the way He revealed the Kingdom of God in his life. It will also be a joyful time knowing that Bill no longer has to wait to see the Lord Jesus. We pray that Father God will bless each member of Bill's extended family as they grieve and also give thanks for His life. Matthew 5:4 Blessed are those who mourn for they will be comforted.

Unfortunately I am unable to be present today. I have a recurring memory of Mr. Bill Merriweather standing tall after he and I pushed ourselves into a crowded train in Cairo, then carefully walking through uneven laneways to an English class I was to give. Love to you Joy and your wider family at this time. Your mum and dad have always been held in high regard. Again, love Liz

There will be a huge Harvest for the Kingdom due to Bill's FAITHFULNESS in spreading the Word that Jesus is Lord and Saviour.

Thanks Bill for 1/2 dozen phone calls to him in November and December And sincerest condolences to his children on his passing.

William "Bill" Gerald Merriweather Joyce & Ford remember Bill as a real Christian friend & a true brother in the Lord. He was deeply involved in our ministry to the less fortunate people who live in Romania. He was our mentor and a spiritual adviser in many areas of our Christian life. Bill was a true man of God. A godly man. A man who loved God's word, lived by it daily & also preached it without fear. A deep prayer warrior and above all he loved his Lord & Saviour with all his heart, mind and strength. We will miss our dear brother whom we have known for a long time. The church here on earth has lost a saint of God. Godly people are few; it is a call to us who are left to walk and work as Bill did closely with the Lord. Bill is now 'asleep in Jesus', peacefully awaiting the Lord's return. Thank you Bill, your life has encouraged us, blessed us and pointed us to Jesus. You remain in our hearts, Joyce & Ford Pratt (March 2018)

Its with human sadness we say a temporary goodbye to a faithful man of God. A Godly teacher and leader of young people, a Godly friend and an example of a life sold out for His Father. Safely home with His Heavenly Father and 'well done'. 'Bill' and 'Ruth' remembered with great affection and Godley example in my life. Love to all the family. xx